Brand Evolution – Taking your brand in a new direction

Things change, that’s a simple fact of life. Whether it’s relationships, musical tastes, fashion, things constantly evolve. Brand evolution is no different. The brands that we have grown up with, will at one time or another, undergo an update. Whether this is a radical update such as PricewaterhouseCoopers (now PWC) or more of an act of refinement such as Google. Brands change to reflect the changing tastes of their target audiences and societal changes.

Often the word ‘brand’ gets confessed with ‘logo’. A brand is an idea or image people have in mind when thinking about specific businesses,  products, or services. It is not just the physical features that create a brand but also the feelings that people develop towards the company or its product. This combination of physical and emotional triggers when they see or hear the name, the logo, the visual identity, or even the message communicated.
One of the brands that epitomise this is Apple.

The brand evolution of Apple

Most of us associate Apple with high-end computers such as the iMac and devices such as the iPhone, iWatch and iPad. They stand for cutting edge design, quality well-built products that aim to make people’s lives easier. The iconic Apple logo that we know today wasn’t the companies first logo. In fact, The first logo was created by Ronald Wayne, a co-founder of Apple 1976. He wanted to represent the law of gravity that is inspired by an apple. The first image to represent Apple was Isaac Newton, the man who revolutionised science with his discoveries on gravity. How did he figure it out? An apple fell on his head! Apple’s first logo was a depiction of this event, with Newton sitting under an Apple tree. 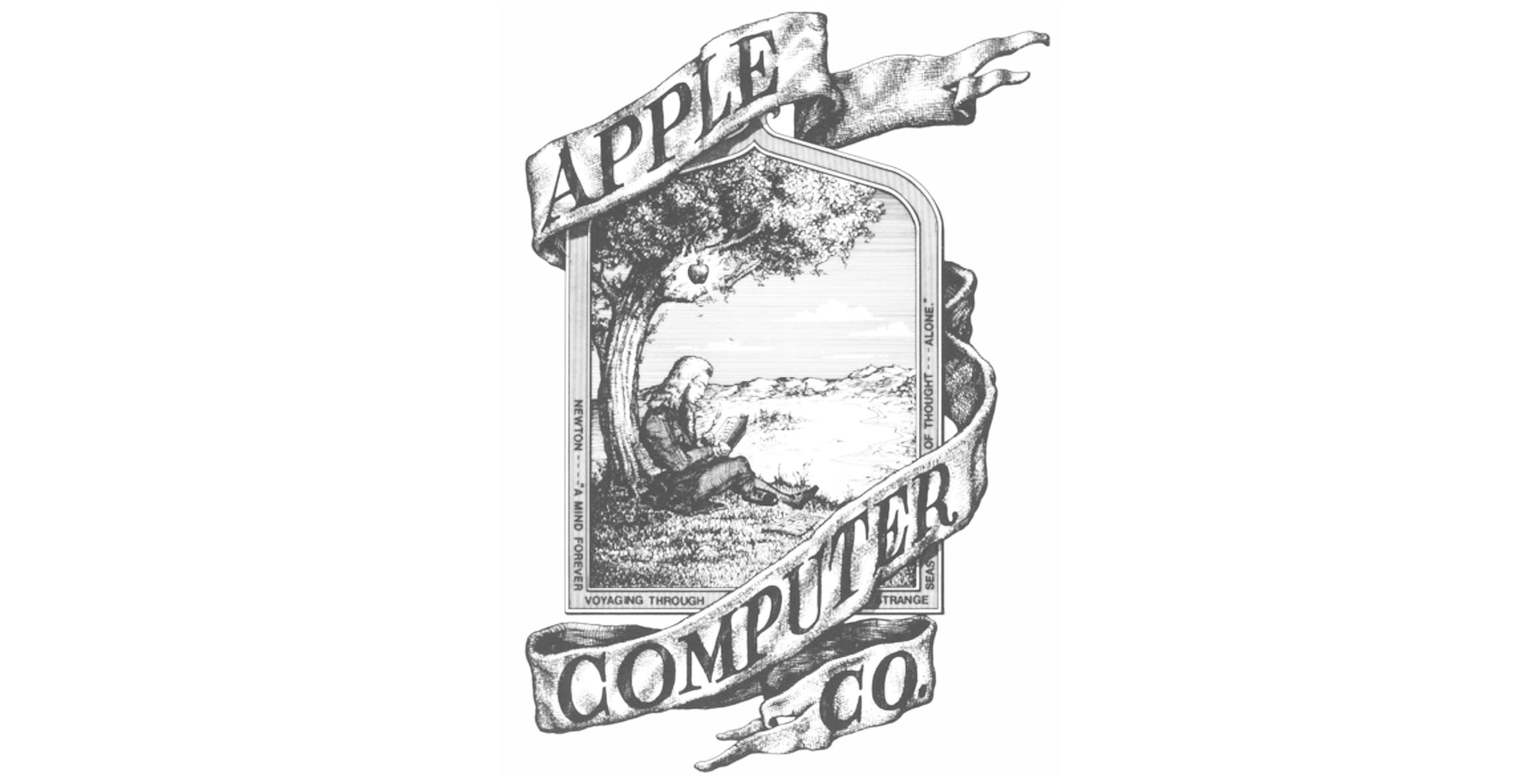 However, this logo was short-lived as another founder of Apple could see the company heading in a different direction. Steve Jobs, one of the main driving forces behind the business, felt the logo was too old fashioned. It didn’t appeal to the right target audience and didn’t set the tone for a company that wanted to be at the forefront of computer technology. Jobs wanted the Apple name and logo to be simple but easily recognisable. He hired a graphic designer by the name of Rob Janoff, who created the now classic and world-renowned logo of the bitten apple.
Jobs quickly threw out the old Newton logo, and Apple’s logo was fully established and used by the end of the company’s first year. The initial identity development was to coincide with the introduction of the brand’s first personal computer, the Apple II. Janoff’s original Apple logo was made up of multicoloured stripes, a nod towards the Apple II, the first computer with a colour display.

From computer company to lifestyle brand

From those early days, Apple has been represented by the simple shape of an apple. That’s not to say that the logo hasn’t changed over the years. Just as technology advanced and tastes changed, the multi-coloured Apple logo became associated with those early computers. The beige boxes that had limited storage and the multi-coloured Apple logo with ‘Apple Mackintosh’ in a serif font next to it. This was replaced in 1998 by the translucent Apple logo that adorned the side of their ‘G3 Mac’ computers. The more simplified logo would appear in one colour but this had its advantages as it allowed them to open up their colour palette which was particularly helpful when they redesigned their iMac computer.

Apple had acknowledged that their target audiences were changing. A computer that had primarily been a staple of the workplace was now making a breakthrough into the home computing market. It was becoming a tool of self-expression. It would hold your music library, pictures, games and be your gateway to the internet (dial-up of course). It was also becoming a design statement. No longer were computers hidden away in the corner of a bedroom, instead, they became the focal point of a room. People wanted high-end design, they wanted a computer that could do multiple functions, and they wanted it within a price bracket they could afford… Apple listened to them and repositioned. It changed from being a computer company to an aspirational lifestyle brand. Their brand had yet again evolved.

It’s normal for a business to change over time. As your business grows and diversifies most people’s first thought is ‘rebrand’. In some cases, this is the most effective thing to do. You could have a totally different business offering that people wouldn’t have previously associated with your business. In other cases, it could be good to build on the reputation and client base that you already have by just slightly changing how your business looks to align yourself with new target audiences, new values or a new business vision.
If you feel that now is the right time to refresh or undergo your own brand evolution get in touch with us. Either call us on 0141 354 1711 or use the form on our Contact page.
Contribute-Staff2022-06-28T09:33:10+00:00September 23, 2021|Branding, Branding East Kilbride, Branding Glasgow, Branding Hamilton, Branding Lanarkshire, Branding Motherwell, Branding Paisley, Business, Creative Agency, Graphic Design|

Page load link
We use cookies on our website to give you the most relevant experience by remembering your preferences and repeat visits. By clicking “Accept”, you consent to the use of ALL the cookies.
Cookie settingsACCEPT
Manage consent

This website uses cookies to improve your experience while you navigate through the website. Out of these, the cookies that are categorized as necessary are stored on your browser as they are essential for the working of basic functionalities of the website. We also use third-party cookies that help us analyze and understand how you use this website. These cookies will be stored in your browser only with your consent. You also have the option to opt-out of these cookies. But opting out of some of these cookies may affect your browsing experience.
Necessary Always Enabled
Necessary cookies are absolutely essential for the website to function properly. These cookies ensure basic functionalities and security features of the website, anonymously.
Functional
Functional cookies help to perform certain functionalities like sharing the content of the website on social media platforms, collect feedbacks, and other third-party features.
Performance
Performance cookies are used to understand and analyze the key performance indexes of the website which helps in delivering a better user experience for the visitors.
Analytics
Analytical cookies are used to understand how visitors interact with the website. These cookies help provide information on metrics the number of visitors, bounce rate, traffic source, etc.
Advertisement
Advertisement cookies are used to provide visitors with relevant ads and marketing campaigns. These cookies track visitors across websites and collect information to provide customized ads.
Others
Other uncategorized cookies are those that are being analyzed and have not been classified into a category as yet.
SAVE & ACCEPT
Go to Top